All in solar energy and save energy SOLAR INVERTERS 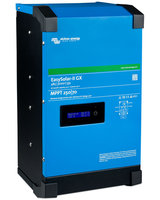 Photovoltaic solar inverters is the part of the installation that transforms the direct current generated by the solar panels of the solar installation into 220v 50Hz alternating current, which is the one used by appliances in normal use.

Hybrid Inverters and self consumption

Solar inverters of all powers and voltages for self-consumption installations by solar energy.

Modified sine wave inverters for solar instalations that not to feed electronics devices only lights or motors.